In very nice condition! Front and back are excellent, a few small scratches on top and one side.

Includes factory remote. Original box and packing are not included. Manual can easily be found on-line.

From 2001-2004. The state-of-the-art MX134 Audio/Video Controller from McIntosh Labs is THX certified and comes equipped with a powerful Motorola 24-bit Digital Signal Processor for decoding Dolby Digital/Pro Logic, DTS, and THX, along with processing of the latest multichannel 7.1 THX Surround EX and DTS ES technologies. This model also provides several imaging controls that allow tuning of the center channel, and surround channel steering. In addition, its internal processor, is augmented by an 8-channel input for use with external processors. The MX134 employs a 24-bit stereo Analog-to-Digital (A/D) converter on the analog input, and four 24-bit stereo Digital-to-Analog (D/A) converters at the DSP output. The MX134 also incorporates the new ProLogic II decoding for movies and music. Using a 2-channel Dolby-encoded soundtrack, Dolby's latest technology improves the surround imaging by providing separate surround channel information, in contrast to the mono surround channel used in standard ProLogic. For music, ProLogic II allows full range directionality from the surround speakers with no added delay. In Stereo Mode, analog signals bypass all DSP processors for a pure unaltered signal.

There are eight operating modes: Stereo, Music 1, 2 and 3, Cinema, THX Cinema, External and Mono. The Cinema positions use illuminated logos to indicate which surround processors are in use - Dolby Digital or DTS, depending on which bitstream is detected. Only the left and right front, and subwoofer outputs are active in Mono and Stereo modes. All outputs are active in all other modes. All operating modes are accessible from the hand-held remote control. Featuring an auto-memory mode setting for each input, the MX134 memorizes the playback mode setting used for each input, allowing the unit to be custom configured for the way each person uses the MX134. For example: when playing a CD, the MX134 will switch to Stereo mode; however, in DVD mode, it switches to THX Cinema.

The rear panel of the MX134 is set up in five groups of RCA jacks for analog audio: 11 A/V inputs with re-assignable input selection, external inputs (for an 8-channel external processor), Zone A outputs and Zone B outputs. An additional input is provided for the optional TM-1 AM/FM Tuner. A male 25-pin subminiature "D" connector is available for connecting all eight surround sound outputs and the power control signals to McIntosh's 6-Channel Power Amplifiers.

Another group of digital audio inputs provides access to three coaxial inputs and three optical inputs, which are assignable to any A/V source. The digital outputs can feed an external digital processor, which in turn connects to the RCA External Inputs, creating an A/V Digital processor loop. There are two groups of video input and output jacks. For each audio input there is a matching composite and S-Video input, allowing for the flexibility to reassign any input to a specific A/V source. MX134 inputs also offer component video. In addition, there is a video converter to convert composite or S-Video to component video.

The MX134 is set up for remote control of two zones. A master control microprocessor, programmed by McIntosh, receives and decodes signals from separate IR sensors or keypads. One sensor is on the front panel for Zone A, the other is connected to the Zone B keypad input. This microprocessor controls the volume and input selection logic.

A new McIntosh feature, similar to the Power Guard circuit employed by other McIntosh processors and amplifiers, allows the MX134 to monitor input voltage,. If overdrive occurs, the input signal level is attenuated automatically. A doubleshielded (copper and steel) power transformer eliminates hum pickup from the power transformer. The electronically regulated power supply maintains stable operation even during brownouts or low line voltage. 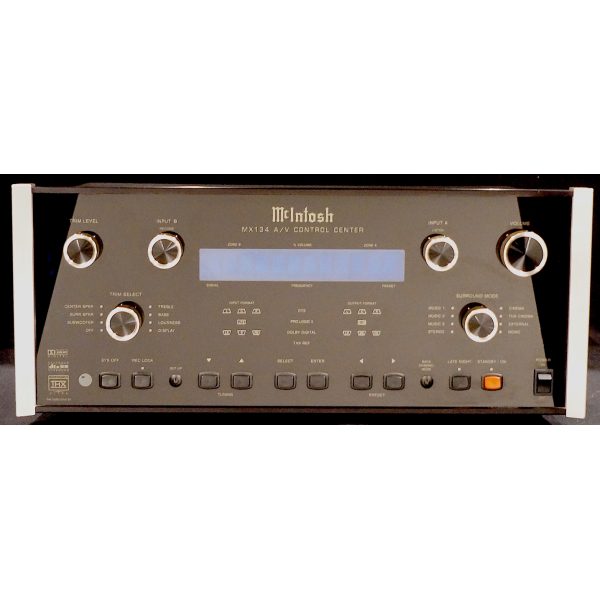 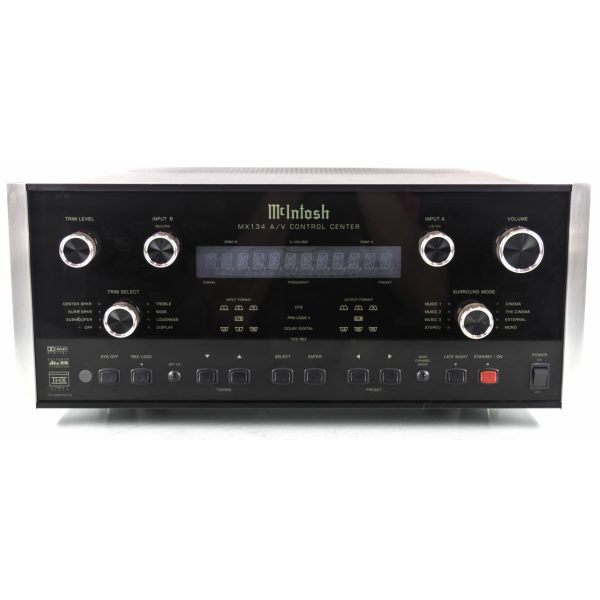 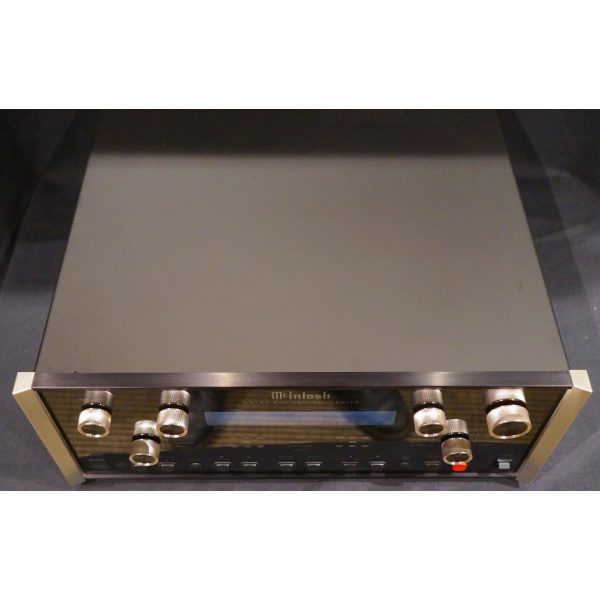 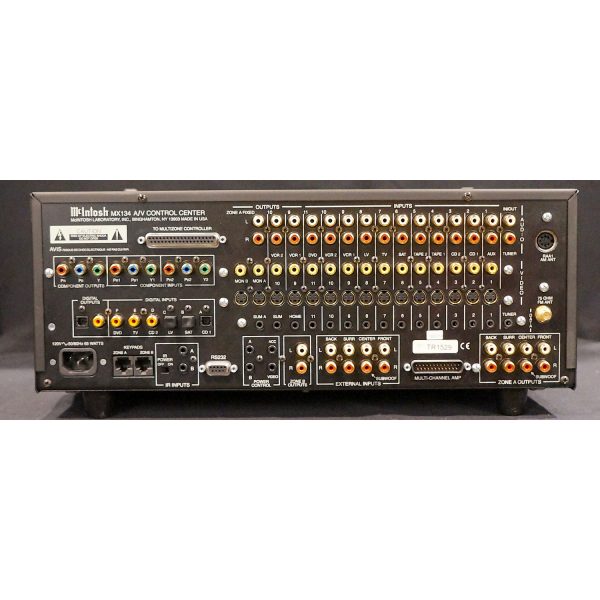 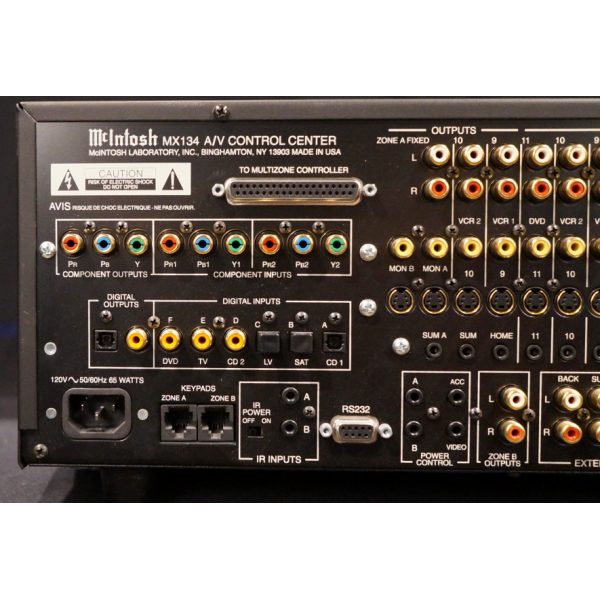 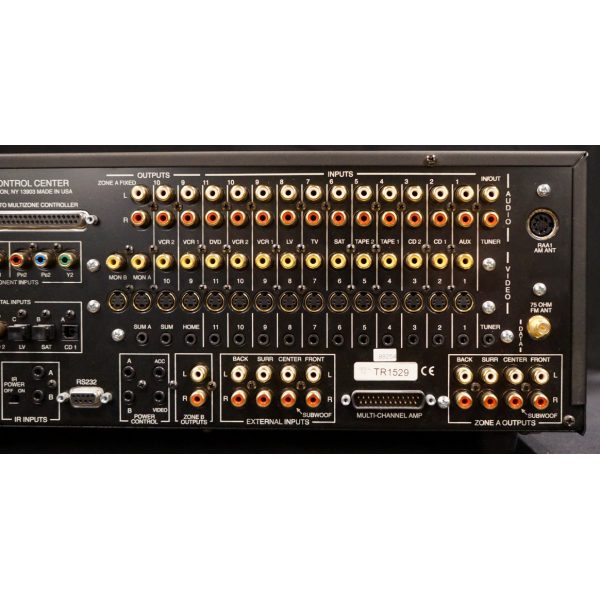 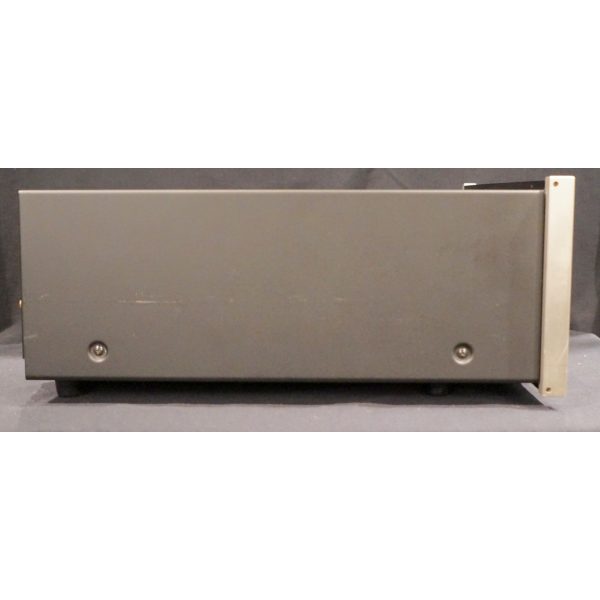 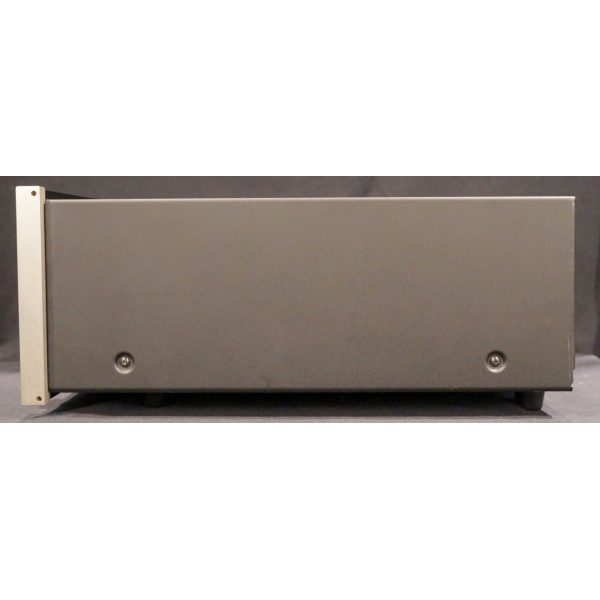 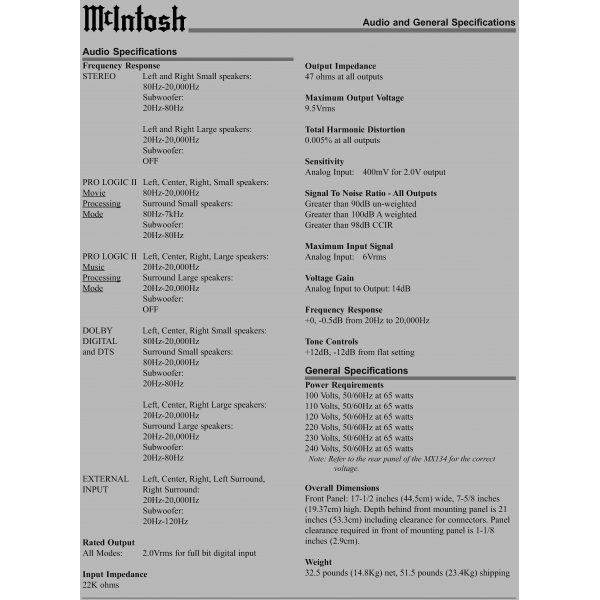